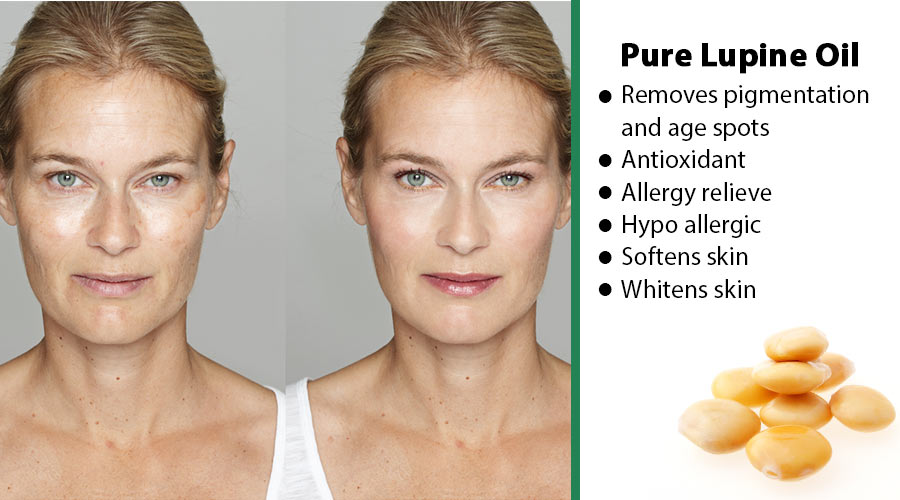 Lupine oil has a high nutritional value in fiber and protein and low in fat. Contain bioactive compounds, which are helpful in preventing cancer and cardiovascular disease. The high protein content of Lupine oil makes it perfect to add in protein shakes and dietary snack bars.

Lupine oil used in pharmaceutical purposes, especially for photoprotection, against actinic aging or otherwise, and for protecting the skin against oxidative attacks including pollution and harmful effect of the environment.

Lupine oil, when used pure, brightens and whitens the skin, eliminates freckles and pigment spots. Used as night-mask for face, neck and décolleté. Mixed with Jojoba or Almond oil in equal parts, calms irritated skin, smoothes wrinkles, moisturizes skin. Particularly used as a product for protecting against UV, radiation, infrared radiation. Added into restructuring or toning cream, for the prevention and the regression of lentigo, a nutritive cream, anti wrinkle cream (for combating aging of the skin, epidermis and dermis) and protective day cream. As well as a cream for the contour of the lips and cream around the eyes, regenerative and protective lipstick.

Widely used and gives perfect effect in brightening freckles and lentigo. Apply topically on the affected skin. The best effect when used instead of cream (against aging of the skin) and protective day cream contour of the lips and of the eyes, regenerative and protective lipsticks.