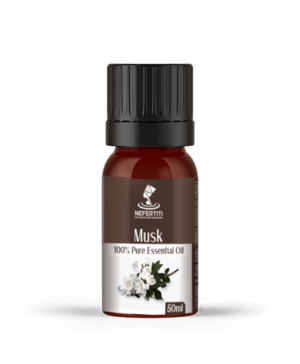 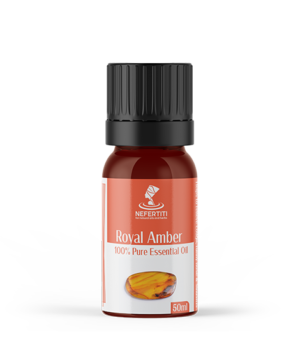 The story states that Nefertiti, the dazzlingly beautiful wife of the Egyptian Pharaoh Akhenaten (circa 1350 BC), placed fragrant cones on the heads of guests in the palace. These cones contained a mixture of animal fat with myrrh resin and some other fragrant herbs. Due to the body temperature, the resin melted and trickled through the hair and over the shoulders of the guests. This turned them into walking clouds of perfume throughout the palace. The existence of the cones has long been doubted because they only existed on drawings found, until in 2019 excavations in Egypt found a skeleton with what must have been one of the scented cones on the head. Other archaeological excavations have previously found the stone cabinets in which Nefertiti used to store the myrrh.

The first mention of myrrh is about 3,700 years ago, making it the worlds’ oldest known perfume. It is well known that myrrh in Ancient Egypt was used to embalm mummies, but it was also a perfume and used for oral care (for bad breath and dental problems), and as a remedy for many infections, including leprosy and syphilis.
As a traditional Chinese remedy, it is used for wounds and bleeding, as well as for the treatment of ulcers, haemorrhoids and women’s ailments.

Myrrh resin has always been an expensive commodity in the South Arabian countries. It was needed everywhere, whether for worship services in temples and in numerous smoke offerings to the gods containing both myrrh and frankincense, or to cast out devils and honour the dead. Myrrh was also used in the anointing of kings, queens, and prophets. The refreshing and penetrating scent of the resin is a welcome appearance on all occasions. Myrrh has been believed to promote and enhance spirituality since ancient times, and has had religious significance for centuries.

Myrrh is a fragrant, yet bitter-tasting substance made of gum and resin, much like olibanum or frankincense. The scents of both myrrh and frankincense are exotic and remarkable, unfortunately though you will rarely encounter these aromas. The name myrrh comes from a Semitic language via Greek: the root “mrr” means “bitter”.
Myrrh can be extracted from several species of the Commiphora plant genus, but is mainly obtained from Commiphora africana. The crude resin is processed by steam distillation, resulting in a thick pale yellow oil with a warm spicy, yet sweet and slightly smoky scent. Myrrh produces a heavy odour when burned.

Commiphora species are typically highly branched, deciduous shrubs with the main stem usually curved. Most varieties have thorn-shaped branches that are perpendicular to the stem and give the plant a whimsical appearance. The plant has sparse, aromatic triangular leaves. After rain, yellow-red or green-white flowers appear, followed by small berries.
Myrrh occurs as a wild plant in dry desert areas. In Somalia, where the plant originated, it is called “molmol”. Today it grows in Northern Somalia, Ethiopia, Arabia, Yemen, South Africa, Saudi Arabia, the Middle East and India.

The granular resin is collected through incision of the trunk. Due to very high desert temperatures, the softened resin seeps out by itself. Harvesting of the resin takes place mainly in July and August, the warmest months of the year. The resin ducts slowly drain and the plant should be left alone during the next six to twenty-four months after cutting, to prevent the plant from drying out and dying. The resin is dried before distillation. The yield of the essential oil from myrrh is about six to eight percent, which means it takes about 16 kg of resin to produce one litre of oil. The colour of the viscous oil can vary between yellow-green and amber, it becomes more viscous with age. As a base note, myrrh is used in very small percentages in oriental or strong floral perfumes. Essential myrrh oil has a strong spicy and sweet scent.

Myrrh is used in the cosmetic industry in the production of toothpaste and mouthwash, and as a flavouring agent in food and (alcoholic) drinks. In the Middle East, bitter myrrh is chewed for its antiseptic effect. In African folk remedies it is known and used for its disinfecting ability.
Many healing properties have been attributed to myrrh since ancient times. It is said to be an antiseptic, astringent (mucous membrane of gums and oral cavity), expectorant and blood cleansing. The disinfecting effect can be attributed to the tannins in the resin that also provide wound-sealing. The myrrh resin remains as a protective layer on the treated wound, preventing any bacteria to penetrate. Myrrh has many health applications, such as to combat bronchitis, eczema, ringworm, wrinkles, wounds, arthritis, toothache, headache, irregular periods, (chronic) colds, haemorrhoids, respiratory tract infections, laryngitis, impure skin, athlete’s foot, gingivitis (gum disease), mouth ulcers or inflammation, lung disease, and possibly thyroid disease.

One of the oils used in Ancient Egypt to embalm mummies was myrrh. Besides the nice scent it provides, it also slows down decay. Scientists now know that the oils used for embalming kill bacteria and other microbes. Additionally, myrrh incense – often combined with frankincense – was burned in places of worship to help purify the air and prevent the spread of contagious diseases, including those caused by bacteria. A recent study found that burning myrrh and frankincense reduces airborne bacterial counts by 68%.
Preliminary animal research suggests that myrrh can directly kill bacteria, as well as stimulate the immune system to produce more white blood cells, which also kill bacteria. In test-tube studies, myrrh oil has strong effects against several infectious bacteria, including some of the drug-resistant bacteria.

Myrrh has traditionally been used to treat oral infections and inflammation due to its antimicrobial properties. A study found that people with Behcet’s disease – an inflammatory disorder – using a myrrh mouthwash (4 times daily during one week) to treat painful sores, 50% of them had complete pain relief and 19% had complete healing of their mouth sores. Test-tube studies suggest that mouthwash containing myrrh oil may also help gingivitis, an inflammation of the gums around the teeth due to a build-up of plaque. More studies are needed to confirm these benefits, meanwhile keep in mind to never swallow myrrh oral-care products.

Traditional use of myrrh includes treating skin wounds and infections. A test-tube study found that myrrh oil mixed with sandalwood oil was especially effective at killing microbes that infect skin wounds. Additionally, myrrh oil alone inhibited 43–61% of the growth of five fungi that cause skin conditions, such as ringworm and athlete’s foot. Although more research is needed to confirm these benefits, myrrh oil can be used for general skin health when diluted and applied directly on the skin.

Headaches, joint pain and back pain are common complaints. Myrrh oil contains compounds that interact with the body’s opioid receptors, informing the brain you’re not in pain. Myrrh also blocks the production of inflammatory chemicals that can lead to swelling and pain.

The following applications are under study to confirm the potentials of myrrh oil and its beneficial compounds.

Sunscreen – test-tube study found that myrrh oil added to SPF 15 sunscreen significantly increased the blocking of ultraviolet rays than the sunscreen alone. Myrrh oil on its own, was noticeably less effective than the sunscreen.
Cancer – other test-tube studies suggest that myrrh oil may help kill or slow the growth of cancer cells in the liver, prostate, breast, and skin. This seems very promising, although human tests are needed to prove these effects.
Mould – it is also suggested that myrrh oil may kill mould, including aspergillus niger (which commonly appears as mildew on damp walls, and which sometimes can be an attributory cause of pneumonia) and aspergillus flavus (responsible for spoilage and fungal contamination of food).

Myrrh oil is popular for use in aromatherapy, the fragrance is said to evoke clarity, insight and inner peace.

In order to distribute the oil as a fine mist into the surrounding air, simply add 3 or 4 drops of myrrh oil to a diffuser or aroma lamp. Myrrh oil can also be inhaled from a tissue or cloth with a few drops of the oil, or add a few drops to hot water and inhale the steam. Another simple trick is to put a few drops in the cardboard tube of toilet paper, each use of the paper will release a little aroma.
Additionally, vaping myrrh oil can also repel insects and keep them at bay.
The earthy aroma of myrrh oil blends well with spicy, citrus, and floral essential oils, such as frankincense, lemon, and lavender. Especially popular is the combination of myrrh and frankincense – besides from complementing each other’s scents, their interaction produces even greater benefits.

Myrrh oil is very suitable for use as a massage oil. To avoid any skin irritation, it is strongly recommended diluting 10 to 15 drops of myrrh oil with any preferred massage oil or with a carrier oil such as wheat germ, jojoba, almond oil, coconut or  grapeseed oil. This also prevents the myrrh oil from evaporating too quickly.

Avoid applying myrrh oil to sensitive areas around the eyes and inner ear. Clean your hands with soapy water after handling essential oils to avoid accidental exposure to sensitive areas.
Store the oil in a dry, cool and dark place (15-25ºC) and keep out of reach of children. Using myrrh during pregnancy and breastfeeding is strongly discouraged.